Kathmandu Valley- A City of Myths

Kathmandu valley is where mythology and geology intertwine. One can find a story behind every temple, monument, locality or festival in these cities. The stories and the myths here have been handed from generation to generation. Here are some of the myths that surround the three medieval cities.

Kathmandu valley is where mythology and geology intertwine. Made up of three historic cities; Kathmandu, Bhaktapur and Lalitpur, it has a rich past and a history that speaks of gods and goddesses mingling with mere mortals. One can find a story behind every temple, monument, locality or festival in these cities.

The stories and the myths here have been handed from generation to generation. Here are some of the myths (few stories) that surround the three medieval cities.

Kathmandu valley was once a lake

According to Swayambhu Puran, the Kathmandu valley was once a lake full of lotuses floating all around. The former holds that God Manjushree from Tibet once saw a bright flame coming out from the lotus. Thus to see what it really is, he striked with his sword of wisdom and cut a gorge near Chobhar hill.

Thus Kathmandu valley came into existence after the draining of water into the gorge. There still exists this gorge at Chobhar around 6 km southwest from the city. Later the bright flame turned into Swayambhu nath; “swayambhu” meaning self-created.

Some legends also say that Lord Krishna cut the gorge with “Sudarshana chakra” to drain the water that submerged the beautiful valley.

The holy Pashupatinath Temple and its existence

There are several complex stories involving the origins of Pashupatinath. One story goes, in brief, that Lord Shiva and Parvati came to the Kathmandu Valley and rested by the Bagmati while on a journey. Shiva was so impressed by its beauty and the surrounding forest that he and Parvati changed themselves into deer and walked into the forest.

After a while, the people and gods began to search for Shiva. Finally, after various complications, they found him in the forest, but he refused to leave. More complications ensued, but ultimately Lord Shiva announced that, since he had lived by the Bagmati River in a deer’s form, he would now be known as Pashupatinath, Lord of all animals. It is said that whoever came here and beheld the lingam that appeared there would not be reborn as an animal.

Another belief says that the wish-fulfilling cow Kamadhenu took shelter in a cave on the Chandravan Mountain. Everyday Kamadhenu went down to the place the lingam was sunken into the soil and poured her milk on top of the soil. After a few thousand years some people saw Kamadhenu pouring milk on that same spot every day, and started to wonder what that would be. So they removed the soil and found the beautiful shining lingam and started worshiping it. The area where the lingam was found is now the divine and pure Pashupatinath temple.

The sacred place of Buddhists and Tibetans, Boudhanath Stupa

There are different myths on how Boudhanath was created. Those myths come from various branches of Buddhism. According to the Padmasambhav Buddhism, the legend of its buildings is the following:

Jajima was born within an ordinary family of the earth. She had four husbands and gave birth to four sons from each of them. All of them being religious, they decided to build the largest Chhorten (Stupa). Majyamija gave the land needed for the stupa and the construction started. All materials were carried on elephant, horses, donkey, etc. Majyamija died four years later and the sons terminated the Stupa.

It took them almost seven years to complete the whole Stupa. Later, the four sons prayed to respectively become in their next life, a King, a Scholar, a Guru, and a Minister, the first two to disseminate the religion and the two latter to protect it from demonic attacks. All of them got their prayers fulfilled. Nonetheless, none of them had prayed for the animals that helped build the Stupa.

Thus, the Elephant and the Donkey, prayed to become demon in the next life who would destroy the religion. Hearing about those prayers the Crow, the cowherds and shepherds prayed as well to become in their next life the assassins of the demons and allow religion to prosper.

All prayers were fulfilled and each person became what they asked for in their next life. All became renowned character of local mythology who created history around Tibet and the Boudhanath Stupa. Therefore it is believed that if anyone makes a round of the stupa and prays, whatever may the prayers be, the wishes are fulfilled.

The untold stories of Rani Pokhari

Rani Pokhari is a beautiful white temple standing on a lake in the city of Kathmandu. The temple looks beautiful but it does not have a pretty story. The temple is said to be built by a king to appease his wife upon the death of their son trampled by an elephant. The queen was not satisfied at all and the child refused substitution and the lake too. Thus the temple is believed to be haunted by the misery of the queen.

The lake was slippery with misery thus pulled any sad woman who happened to walk along the banks. Too many of them stumbled into the lake and died, perhaps because too many women were unhappy and the only thing that really appeases an unhappy heart is death.

This is believed to be the reason why this beautiful temple standing on the lake is fenced so high that no one can get an access to it. The fence keeps sad, despairing women away from the waters. (The temple got destroyed due to the earthquake in 2015 and now is under renovation.)

How the tradition of Kumari came into existence also consists of a myth. It is believed that the Goddess Taleju used to visit the king in human form at night to advise him and to play dice. One night the king, Jaya Prakash Malla, looked at the goddess lustfully. Enraged the goddess announced that she would never come to him again.

She predicted that both the end of his reign and the fall of his dynasty were at hand. When the king begged for forgiveness, the goddess at last made a concession. The king was to select a virgin child from a Newari caste, proclaim her the living goddess Kumari and worship her, for in this child she herself would manifest. Thus the system came into existence.

The Kumari is selected from the Newari caste of Sakya goldsmiths who are Buddhists. She must have the thirty-two virtues, among which is an unblemished body, the voice of a bird, and the neck of a duck. She must never cry or show fear. To test her courage the child is shut in a room where severed heads of sacrificed animals are placed.

The one that emerges without a trace of fear is the chosen one.  She must also not bleed. As soon as she bleeds during puberty or due to an injury the goddess is believed to leave her body and the child is relieved of her duties as a living goddess and the search for another goddess begins.

The Living goddess is still housed in a building overlooking the Hanumandhoka palace and the Taleju temple, at the Kathmandu Durbar Square. The entrance to the building is guarded by large stone lions. If one is lucky, one can get the darshan of the Kumari as she looks out from the window of the second floor.

It is said that King Pratap Malla, brought water from the Budanilkantha temple of Narayanthan and kept that water in Rani Pokhari which was created for his deceased wife and son. He continuously did this until one night he had a dream. In the dream came the angered god of Budanilkantha, God Vishnu and cursed him for using the holy water for his selfish satisfaction.

He said “if he or his descendants ever step on lord Vishnu’s temple then it would be the day that they die”. After this myth the Royal Family that has ended now never went to Budanilkantha of Narayanthan. It is believed to have emerged from the ground and said to have great power.

The mythology of Indrajatra

It is believed that one day lord Indra came to Kathmandu in search of Parijat (Night Jasmine) as ordered by his mother Basundhara for certain ritual. While plucking the leaves, the farmers around caught him and  tied him up claiming him as a thief. He was then displayed as a thief to the locals in the towns of Kathmandu.

Thus, due to his absence, his mother Basundhara worriedly came in search of her son Indra. She found him tied up by the locals in the town, convinced them that he was lord Indra and promised the farmers to provide enough dew drops throughout winter to ensure a rich crop.

Thus Indra jatra is celebrated mostly by the local Newar community to celebrate and thank Lord Indra for providing enough rain during winter. It is believed that Kathmandu starts to experience foggy mornings from this festival onward because of this boon.

These are few of the stories related to various myths of this mythical city Kathmandu. Thus, every time you visit one of the cultural heritages or religious sites or be a part of any festival, you will learn all the stories behind them about this city. 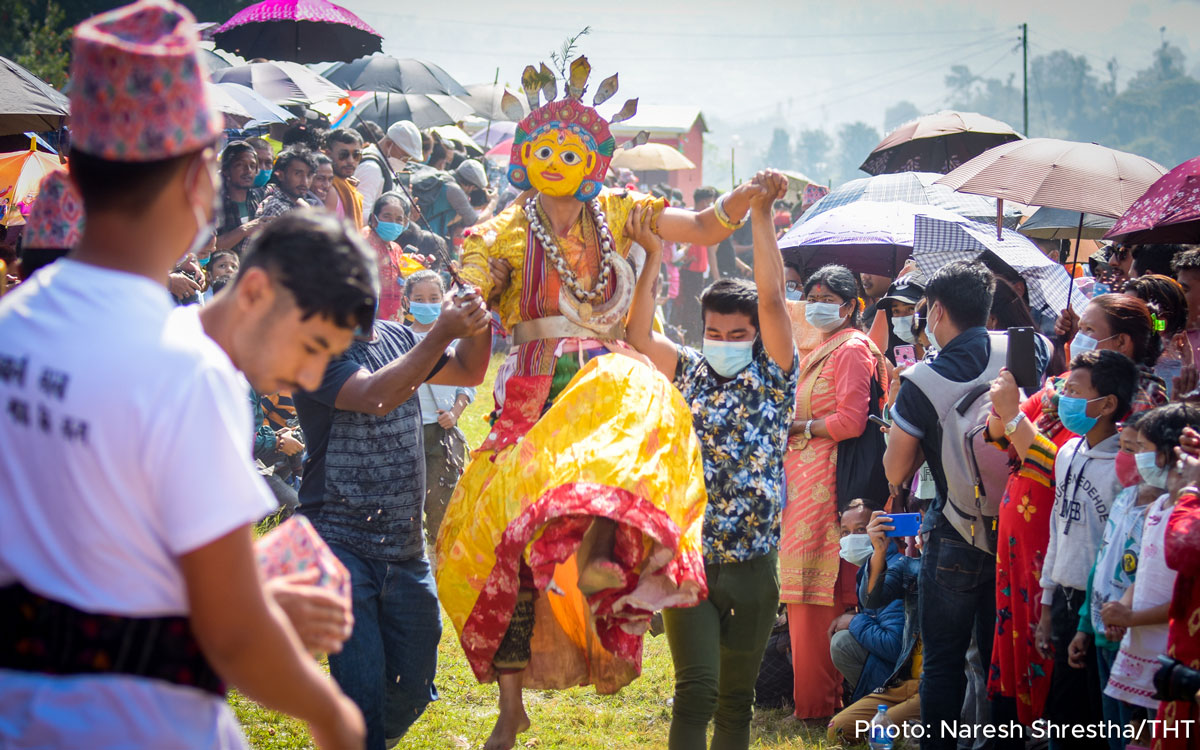 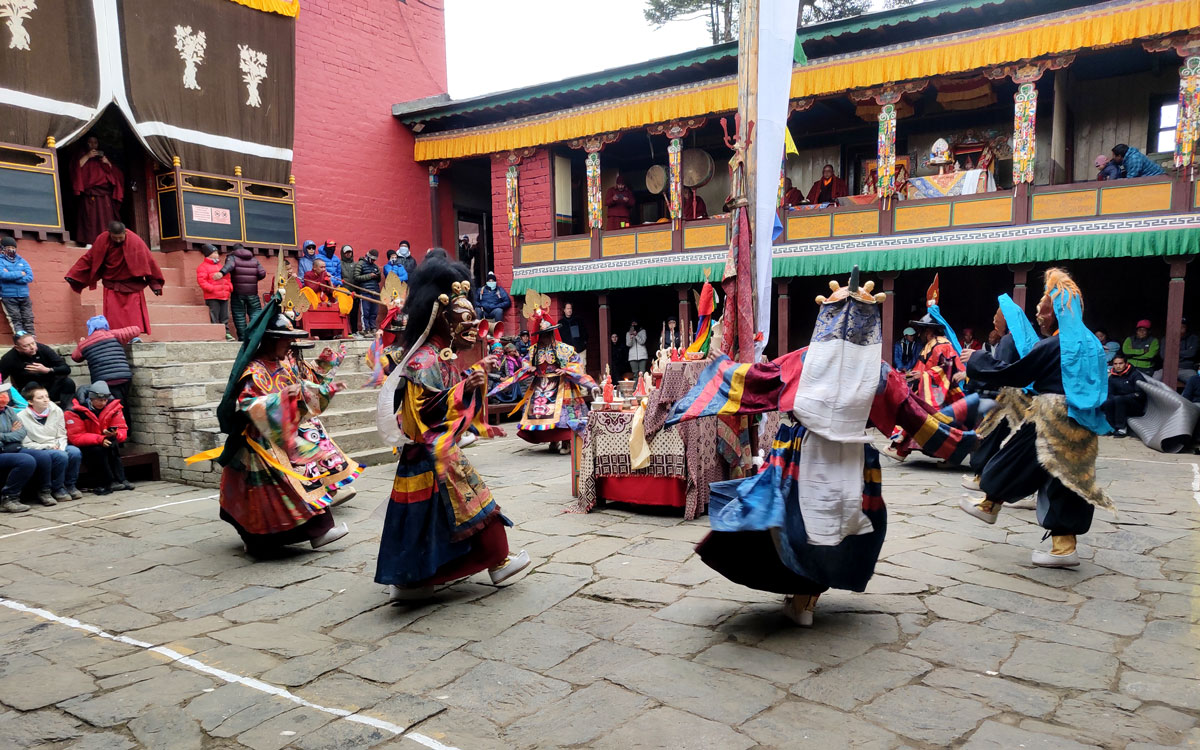